What do freshly painted bicycle lanes, micro apartments, borderless immigration, climate change, abortion-on-demand, and Common Core all have in common?  The answer? They are all elements of the UN Agenda 2030, ratified by essentially all the nations in the world.  How so?  Well, the key word is “sustainable”.

What could be more worthwhile than seeking for that which is sustainable, and avoiding that which is not?  Certainly a “feel good” word, but what does it mean in terms of the list of observations above?

What Agenda 2030 amounts to is coordinated effort by all the nations on earth to be guided by world-wide principles, as designed by a group of “globalists” who have envisioned a world implied by the lyrics of john Lennon’s song, “Imagine”. These globalists first assembled UN Agenda 21, which began the sustainability movement in the early 1990s, from the ground up.  They dealt in a clandestine manner with local and regional governments to achieve their goals, dealing especially with land use: zoning, permits, where development is allowed, where it is forbidden.

Agenda 2030 is essentially Agenda 21 on steroids, and works from the top down.  The UN is at the top, followed by grouping of nations under a common set of goals – for example, the European Union – and then at the single nation level, where the goals are implemented throughout the country, directed from the top level of the government.

Before looking at details of Agenda 2030, we need to first consider what took place with Agenda 21, a program of the United Nations entitled “Sustainable Development Agenda 21”, unveiled in 1992, and “adopted” by 178 nations. This is actually a comprehensive political ideology, reaching into a country’s government at every level.

Rosa Koire, author of the 2011 book, “Behind the Green Mask: U.N. Agenda 21“, states the following in a 2013 speech in Denmark concerning United Nations Sustainable Development:

It is the action plan to inventory and control all land, all water, all minerals, all plants, all animals, all means of production, all construction, all energy, all education, all information, and all human beings in the world.

Ms. Koire served as a land use expert witness in the San Francisco Bay area when she encountered organizations connected to Agenda 21 in a stealthful manner.  One of the important aspects of their approach was to build so-called community support for their projects, by recruiting people beforehand to buy into initiatives, and then bring them into a lightly advertised community meeting run by well-trained “consensus builders” who are skilled at manipulating unsuspecting residents using a dialectical method to deconstruct and/or re-cast traditional views such as private property ownership.

At its most basic level this method generally includes two exaggerated extremes, where a “thesis” is usually proposed as a departure from the norm which would be too extreme for the listener, while the antithesis is usually a caricature of the existing consensus. In this way, a false tension is established which creates the felt need for resolution. The speaker then proposes a “synthesis” which is actually a departure from the now supposedly discredited traditional position, but thankfully to the listener not as far as the thesis position. Hence the listener is often moved to the synthesis position, and feels good about this change.  And it gives the false impression that a community consensus has been achieved.

This kind of mind-manipulation has been happening throughout the US for several decades to move the population into the sustainability mindset.  Combine this with the wholesale infiltration of sustainable development into the educational system from pre-K to post-graduate, and a cultural consensus in favor of sustainable development seems to have been achieved.  In the case of Millennials, the indoctrination is so complete, and dissenting objective truth and logic so skillfully marginalized, demonized and rendered invisible, that the appeal is made to their emotions, with the resulting reaction to opposing (and rational) points of view of moral indignation and disgust.

Tom DeWeese, in his 2016 American Policy Center Report explains how the architects of this ideology pursue “Sustainable Development”:

In short, Sustainable Development is the process by which America is being reorganized around a central principle of state collectivism using the environment as bait.

One of the best ways to understand what Sustainable Development actually is can be found by discovering what is NOT sustainable.

According to the UN’s Biodiversity Assessment Report, items for our everyday lives that are NOT sustainable include: Ski runs, grazing of livestock, plowing of soil, building fences, industry, single family homes, paved and tarred roads, logging activities, dams and reservoirs, power line construction, and economic systems that fail to set proper value on the environment (capitalism, free markets).

According to DeWeese, the three legs of Agenda 21 that intersect are social equity, economic prosperity and environmental integrity: 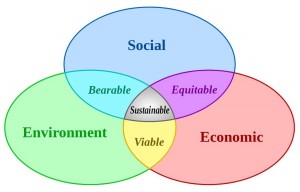 The “collective” or “communitarian” aspect of Agenda 21 is seen everywhere as it is deployed.  There is a very fundamental change demanded: from individual freedom to collective conformity.  Instead of each human dealing with their own destiny, with personal growth, development of skills, envisioning plans for the future, and pursuing those goals, there is conformity to the state: no private property, everything rented or leased, ability to travel restricted, everything in one’s life monitored by the state.

Perhaps the greatest “evil” according to the Sustainability advocates is free market capitalism, because it results in personal winners and losers, according to the Pareto principle.  Thus, at any point in time, some people and corporations will be wealthy, and many others near poverty.  While this is a real problem, the fundamental question is what kind or political/social configuration provides the greatest possibility for humans reaching their full potential, accepting the reality of inequity in all of life.

On the Sustainable side, individual potential is sacrificed for conformity to top-down totalitarian control.  One must ask: where has this ever succeeded without violence and nearly total poverty?

As far as the option of free market capitalism is concerned, it is clear that it must be subjected to important regulations, to deal with potential pathologies.  For example, it must be carried out within a rule-based legal system.  Further, the society must be given incentives to deal with those who are disadvantaged and/or living in poverty.  Additionally, capitalism works at its best within a society where transcendent spiritual values as found in Judeo-Christianity are pursued and valued by many.

A few sample visible aspects of Agenda 21 are the following:

What is not yet as visible are goals such as:

United Nations Agenda 21 Sustainable Development is the biggest public relations scam in the history of the world.

Of course, beyond public relations are the actions being implemented around the world in an accelerating rate to achieve the Agenda 21 goals.

It is instructive to consider the stated goals of Agenda 2030, but to do so, the statements need to be translated from devious “sustainability-talk” to objective truth.  Here is a “translation” from Agenda 2030 Translator: How to Read the UN’s New Sustainable Development Goals:

Goal 1: End poverty in all its forms everywhere

Goal 3: Ensure healthy lives and promote well-being for all at all ages

Goal 5: Achieve gender equality and empower all women and girls

Goal 6: Ensure availability and sustainable management of water and sanitation for all

Goal 7: Ensure access to affordable, reliable, sustainable and modern energy for all

Translation: Smart grid with smart meters on everything, peak pricing

Goal 10: Reduce inequality within and among countries

Goal 14: Conserve and sustainably use the oceans, seas and marine resources for sustainable development

Goal 16: Promote peaceful and inclusive societies for sustainable development, provide access to justice for all and build effective, accountable and inclusive institutions at all levels

Goal 17: Strengthen the means of implementation and revitalize the global partnership for sustainable development

(the above used by permission)

A more exhaustive “translation” of the goals has been provided in an article  entitled, The United Nations 2030 Agenda decoded – It’s a blueprint for the global enslavement of humanity under the boot of corporate masters.

Critiquing the full details of Agenda 2030 is beyond the scope of the Primer, but a useful document containing the thoughts of several of the leading critics of sustainable development as defined by the UN is entitled: “The U.N. 2030 Agenda for Sustainable Development: A Critique.”  Consider the Amazon description for this book:

This publication is a series of critical commentary regarding the United Nations 2030 Agenda for Sustainable Development, which includes specific goals. These goals are part the draft resolution which was referred to the United Nations General Assembly in September 2015, titled, “Transforming our world: the 2030 Agenda for Sustainable Development”. Author and commentator Patrick Wood, author of “Technocracy Rising”, comments regarding “soft” or “reflexive law” to explain how sustainable development is being implemented. Tom DeWeese of the American Policy Center, and Mary Baker of “Citizen Ninga” activist training fame, offer a compelling critiques of “Agenda 2030” and its goals.

U.N. Agenda 2030 is an international wealth redistribution scheme to transfer wealth from “rich” nations to poor nations. Unlike U.N. Agenda 21, which was installed worldwide at the local level, this new scheme seeks to transform the economic structure of the world from a priced-based system or capitalism, to a socialist carbon-based currency system, using strict conservation rationing system, or technocracy.

Critique: One way of looking at UN Sustainable Development and the agendas is that this is the realization of the socialist utopia that has been mentioned several times in this Primer.  In a disturbing sense, it has commonalities to the 20th century socialist experiments which resulted in unprecedented death, and abject misery for survivors.

What seems to be working quite well for the UN elites supporting is the increasing hegemony of politically correct thought, with the march through the institutions of Western culture essentially complete. What is different from the 20th century is the pervasive increase in technocracy, which makes propaganda and coercion much more effective.

There are a number of articles, booklets and pamphlets that can provide details of Sustainable Development and the UN Agendas 21 and 2030, as follows:

American Policy Center provides a brief overview of Agenda 21, in one easy lesson. This 6-page article is a good place to start in gaining understanding of scope, goals and methodology.

An extensive description of the various facets of Agenda 21. That this report is dated 2017 underscores the truth that Agenda 21 hasn’t been replaced by Agenda 2030. In fact, at the local and regional level, it continues to be a fundamental component of the UN’s effort to implement their collectivist utopia throughout the world.

Journalist Alex Newman provides an overview of UN Agenda 2030 and Sustainability Development, demonstrating that it is a road map to global socialism and corporatism/fascism. He mentions the unsavory world “leaders” that buy into Agenda 2030, while crushing human rights in their own countries. This article is an excellent introduction to Agenda 2030.

A 16-page pamphlet from Freedom Advocates, exposing details about UN Agenda 21 and sustainable development. From their website, “Freedom Advocates promotes the unalienable rights as expressed in the American Declaration iof Independence. Today many laws and policies implement Agenda 21/Sustainable Development which ignore and violate unalienable rights.” Concerning UN Agenda 21 and 2030: “Sustainability Agendas push words and programs that sound good, but are not. Here is a pamphlet for you and/or your elected representatives that explains things.”

This article is written by someone who to a degree buys into Sustainable Development, but is disturbed by the incorporation of undemocratic regimes and other corrupt aspects into the unfolding of the agendas.

In addition to this book, there is a large collection of videos in YouTube which deal with various aspects of both Agenda 21 and Agenda 2030; some examples are provided in the Appendix.

This site uses Akismet to reduce spam. Learn how your comment data is processed.